In 2018, Organization of Economic Development (‘OECD’), announced that the UAE has become a member of the Base Erosion Profit Shifting inclusive framework (‘BEPS IF’). Being a BEPS member, UAE was required to commit to the BEPS minimum standards i.e UAE would be required to commit to all the Actions listed in the BEPS IF.

On 12th March 2019, European Union list was further revised which included UAE in the blacklist. This was primarily due to UAE supporting offshore structures and arrangements aimed at attracting profits without any real economic substance.

As part of the UAE’s commitment as a member of the OECD Inclusive Framework, UAE has issued a resolution on Country by Country Reporting is part of Action 13 (Transfer Pricing Documentation and Country-by-Country Reporting).

The purpose of CbC Reporting is to eliminate any gap in information between the taxpayers and tax administrations with regards to information on where the economic value is generated within the MNE Group and whether it matches where profits are allocated and taxes are paid on a global level. 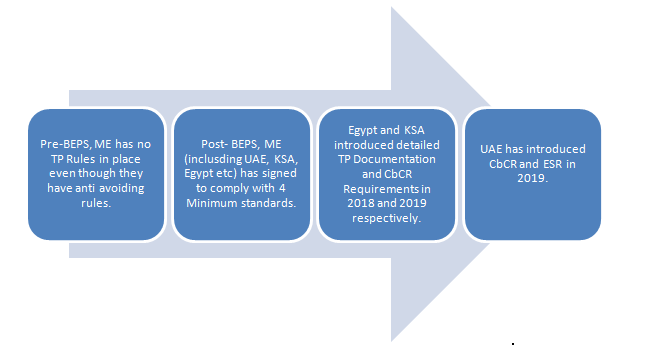